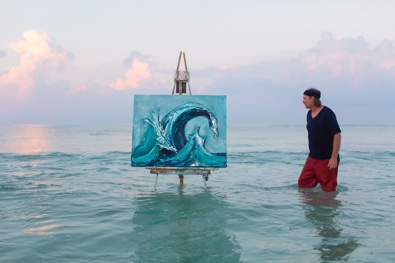 Justin Gaffrey is an artist who challenges himself in vast mediums. Although, his primary body of works is executed in heavy acrylic impastos often 1-6 inches thick. Justin works in his studio outfitted with a full metal and wood working shop creating free standing sculptural works and sculptural paintings. Justin's work is loose and expressive but underplayed with intense study and practice. Justin’s work can be an emotional landscape of his home in northwest Florida, to life size human skeletons, exposing a confused and beautiful life.

As a self-taught artist, his work challenges the norms of art, pushing boundaries is usually the only way he will be satisfied. His work is constantly changing like a moving target, making it hard to pinpoint any particular genre or theme of art. His earlier works have inspired a path for many impasto acrylic painters.
Much of Justin's early inspirations come from artists like Van Gogh, Jimmy Lee Sudduth, and Monet. He has since evolved and finds inspiration in artists like Louise Bourgeois who's work tapped into the subconscious, writers like Mary Oliver with her poems on nature, and scientists like Albert Einstein.

Now that Justin's kids have moved onto college his focus can expand out of daily family life into more exploration in all aspects of creativity and learning. The absurdity of the current political climate in the United States is the driving force for Justin’s most recent work.